WWW.ARTISTICSWIMMING.COM
ArtisticSwimming.com was created to help athletes and coaches improve, to provide a competitive arena in the virtual world, and to connect and grow the community of Artistic Swimming/ Synchronized Swimming.

Our goal is to provide high quality educational materials for the Artistic Swimming/ Synchronized Swimming community around the world.

Our Vision for Virtual Competitions is to enable athletes to compete globally, stay local.
How do you compare yourself to others around your country or the world? When you are at home in your practice pool, it is easy to become complacent. By participating in our VComps, you can compare your skills, speed, strength to others! Discover your strengths and weaknesses. Train to get faster, higher and stronger!
We have 10 levels of VComps outlined currently and are working on new ideas and formats to continue building VComps! 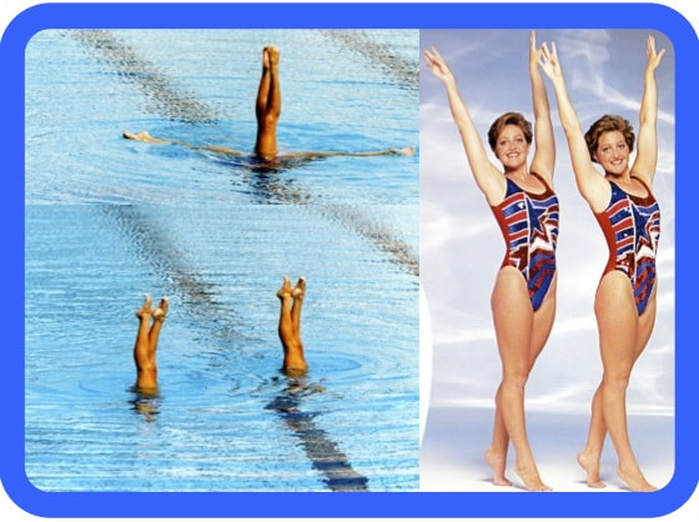 Karen and Sarah Josephson competed in synchronized swimming for more than 20 years, culminating in a Gold Medal in the Duet Event at the 1992 Olympic Games in Barcelona, Spain. They started synchronized swimming at the Bristol Girls Club in Bristol, Connecticut at the age of five and a half. After gaining success at a young age they committed to swimming in college at The Ohio State University where they won multiple collegiate championships in addition to their first National Championship in the duet. In four years, they both completed Bachelor of Science degrees; Karen in Biochemistry and Sarah in Genetics, while competing on the collegiate and US National Teams. After graduating, they made a commitment to the sport for three years to try to compete in the 1988 Olympic Games in Seoul, South Korea. Despite winning the routine portion of the competition and closing the gap on their Canadian rivals, Karen and Sarah won a silver medal. Karen and Sarah had made a decision to retire from competition after the Olympics. Far from being disappointed with the silver medal, they were inspired to make another attempt. After a one year hiatus to strengthen their bodies they returned to competition in 1990 and were unbeaten in the next three years, winning their first World Championship and FINA World Cup titles, setting a world record score in duet, culminating with the gold medal at the 1992 Olympic Games.
After retiring in 1992, they made a decision to continue working with Duke Zielinski who had provided so much support on their road to the 1992 Olympics. Combining their love of the sport with a new perspective on coaching and instruction provided by Duke, they committed to camps, clinics, and helping produce educational materials to encourage and educate swimmers and coaches around the world. For 25 years, Karen and Sarah have continued to coach, host clinics, research, and create new education for the Artistic Swimming/ Synchro Community.
“This material provides a scientific perspective and analysis of the fundamentals of synchronized swimming, presented in a simple format that can easily be understood and communicated to all levels of swimmers.” In a sport in which there is a limited amount of educational materials, Karen, Sarah and Duke felt that they could truly help improve not only the education of swimmers and coaches, but also the enjoyment and the number of participants.